Yesterday I had an enjoyable meeting with Tamara Wilkes-Jones and local landowner Chris Murphy, both representing Project Numbat Incorporated. For those who don’t know Chris, he owns the property on York-Williams Road with the red bucket entry statement to Red Bucket Lane.

Project Numbat Incorporated have in the past provided written letters of support for the Boyagin Rock Day-Use Area Redevelopment Project and now wish to become involved in the project with financial and/or in-kind support with interpretation of the fauna which make Boyagin their habitat and home. This will add greatly to the provisions already made within the project budget and will no doubt add value to the experience by visitors to Boyagin Rock. Particular emphasis is proposed for signage as visitors enter the site from the proposed car parking facilities so that visitor immediately become aware of the special attractions at this site and within the nature reserve. Given this commitment Project Numbat will not only assist us but also promote their own efforts toward their cause for the preservation and promotion of endangered fauna species with particular emphasis on the Numbats.

I have given Tamara direct contact for Greg and Chris at Parks and Wildlife as there is a strong case for both parties to work together and share resources in the creation of any interpretation to be situated at the site as part of this redevelopment project. I am sure you will all welcome Project Numbat aboard and I look forward to working with them moving forward

If you are interested in following the progress of this important project and want to keep informed please click on the "Follow by Email" button. Any progress will be posted here. Please don't rely on me sending reports by other means as it is very time consuming and not all of you may be updated.
Posted by Vince Holt at 04:19 No comments:

Boyagin Rock Project - Where to from here?

With Thursday's announcement of Royalties for Regions funding for the Boyagin Rock Day-use Area Redevelopment Programme we now have committed funding as follows:

Add to this the $15,000 received from Lotterywest to fund the creation of the project Master Plan, and we are looking really good to go! What a great effort by all over the past 3 or more years!

My role now is to coordinate the project through to completion. Expectations are that we can start to get things rolling in the spring of 2016 with a target completion date prior to the end of June 2017. I will keep this blog fresh as we go.

On 4th August 2016 I will be meeting with DPaW to establish a detailed operational plan and to seek some commitments to negotiated timelines. Again, I will report here when more information is available. DPaW are working with DAA to finalise Section 18 approval to proceed with works at the site. Results of that process should be available in August 2016.

Don't forget to follow this blog as it will be one of the main channels of communication as the project progresses.


On Thursday 7th July 2016 Ministers Terry Redman and Mia Davies announced the successful recipients of the 2016 Community Chest Fund, a Royalties for Regions programme. Notably, Seabrook Aboriginal Corporation, as a key stakeholder in the Boyagin Rock Redevelopment Project championed by the Pingelly Tourism Group, were successful in receiving close to $48,000 toward a project to redevelop the Boyagin Rock Day-use Area. This is a community initiative under the umbrella of Boyagin Rock Working Committee (BRWC) which comprises representation from the Pingelly Tourism Group, DPaW, Seabrook Aboriginal Corporation and members of the Pingelly Noongar community.

In his media statement Minister Redman stated The Seabrook Aboriginal Corporation will receive $47,640 to upgrade tourist facilities at Boyagin Rock.


This announcement adds to funding already received from the WA Department for Aboriginal Affairs for Preservation of Aboriginal Heritage Listed Sites. Boyagin Rock is heritage listed and is of significant cultural value to the Noongar peoples. Other stakeholders in this redevelopment project include DPaW and the Shires of Brookton and Pingelly.

This project started back in early 2013 with the establishment of the BRWC, a sub-committee of the Pingelly Tourism Group. The initial stages involved creation of a Master Plan funded by Lotterywest and a series of many meetings and discussions with the traditional owners. Over time and with much patience it became clear there was much common ground in the support of the concept to use the project to promote tourism, enhance visitor experience, promote indigenous culture and to provide a place of educational experiences for schools and visitors in general. The BRWC are now in a position to “get things happening” at Boyagin Rock and we hope to commence works at the site in the spring of 2016.

A copy of the draft site plan is included so that readers can get some idea of what to expect once the redevelopment works are completed. Click Here to View.

The BRWC acknowledges the efforts of all stakeholders and its volunteer members in reaching this important milestone. We will post updates as we progress.

On Tuesday 22nd December 2015 the Boyagin Rock Working Committee met with the Shires of Brookton and Pingelly to present our proposed concept plan for the redevelopment of the Boyagin Rock Day Use (picnic) area. This was a joint presentation by the Working Committee and the WA Department of Parks and Wildlife (DPaW). This is the first occasion where the Shires have been engaged in any discussions about our concept plans and it forms the first step toward securing Shire support for this redevelopment plan. A copy of the meeting notes can be viewed and downloaded here.

A copy of the Redevelopment Concept Plan is available here.

Wednesday 16th September 2015 saw the official release of the long awaited BOODJIN Storybook. the link to the Wheatbelt Natural Resource Management web site is here. A PDF version of this publication can be found on the NRM web page.


The release of the publication marks a major milestone for the Noongar peoples and forms part of the long term strategy established by the Pingelly Tourism Group Inc. Boyagin Rock Working Committee to promote Boodjin and the surrounding area as a site of cultural significance and a place which should be protected and respected by visitors to the area.

The launch itself was something very special and the NRM article here describes the celebration in good detail.

Hi everyone.
As you are probably aware we did have a meeting at Boodjin on Friday last and the spirits up there blessed us with some really nice weather.
Ray Marshall opened the meeting at 12:00pm or thereabouts and Uncle Merv delivered a welcome to country message. 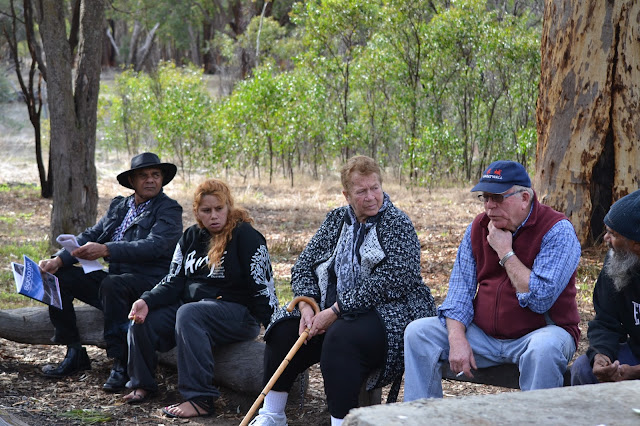 Vince acknowledged the start of NAIDOC Week and wished the Noongar peoples an enjoyable time. The timing of the meeting was very good in the sense that our efforts fall very much in line with the spirit of NAIDOC week and what it stands for.Vince also passed on the apologies from the families based in Perth due to their commitments to organising NAIDOC Week.
The main purpose of the meeting was to allow Department of Parks and Wildlife (DPaW) to present to the group their proposal for the beautification and preservation of the current picnic area at Boodjin. Nathan Greenhill and Chris Steward attended on behalf of DPaW and Nathan presented conceptual plans and spoke at length and sought feedback from everyone. It was apparent that most there were quite welcoming to the ideas placed before them. There was some discussion about positioning of the proposed toilet facilities and the group were urged to go away and think about things in more detail and come back to the working group with suggestions. Nathan provided some large printed plans of the proposal for the communities to take back and display for public comment. 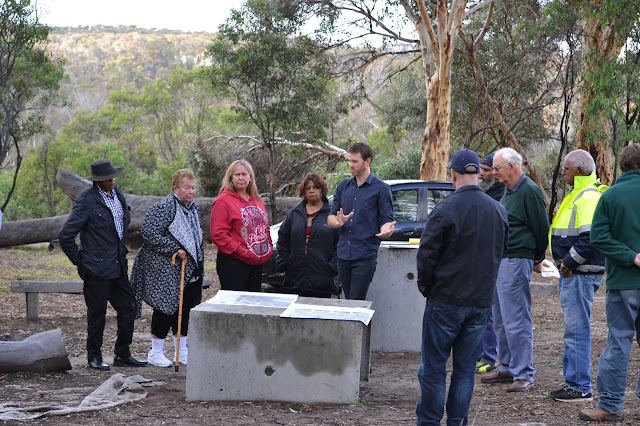 Justin McAllister from SWALSC graced us with his presence as did Marcus Holmes, a solicitor who will be working with the Local Government Councils to address the issues relating to the results of the vote by the Noongar peoples to accept the State Government offer of a settlement in the Noongar regions. Many thanks to those two for taking such an interest in what we are, as a collaborative group, working through in a very positive way and for traveling such long distances.
Justin spoke very clearly about the need for us to start to work more closely with the Gnaarla Karla Booja (GKB) working committee moving forward as they will, in the event of a successful outcome for the land settlement deal, be the entity who will collaborate with DPaW on land management issues. Justin suggested that we, as a working group, again present our current position to the GKB working group in August/September.
There are a lot of things which need to be worked through moving forward. We, along with DPaW, should approach the Shire of Brookton and Pingelly to see how much in-kind support we can get to assist with the redevelopment of the picnic area. Such support could be in the way of access roads, surveying and pegging of the proposed picnic area and provision of machinery to make the site ready for any structural work.

My job as Project Coordinator is to deliberate over these matters and make some recommendations back to the working committee and I am certainly giving this much thought and will have further discussions with DPaW and other members of this working committee to work out the best way forward from here.
It seems that Wheatbelt NRM have signed off on the Boodjin Storybook so it can go to print. What a celebration that should be!!!! I personally can't wait to get my hands on a copy.

I had a yarn on the side of the road with Kenny Kidna on the way back. Maybe that's a good sign??????

Stay safe and well everyone. 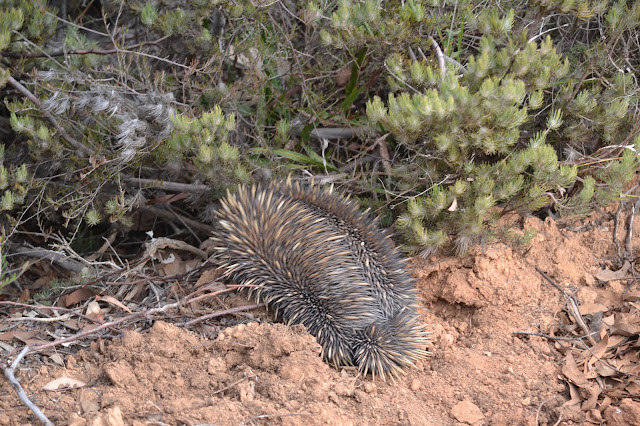